One of the main questions arising around the dam is “How much is it going to cost me?” 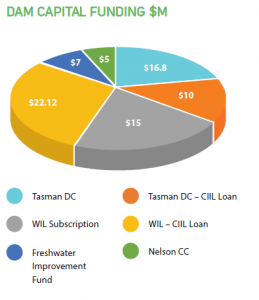 In this world of what I would call best-case scenario:

Total costs to the rate-payer should everything fall within contingencies is $16.8m + $10m (+ $29m underwrite).

These are the figures used to calculate how much rate-payers around the district will be contributing. Should NCC not contribute $5m that will be additional to the figures quoted, as will any cost over-runs.

To date TDC has contributed $6.5m according to figures released.

This figure includes money gathered through a targeted rate on irrigators. It does not include contributions from the Government and other sources by way of grants, and a lot of staff time and miscellaneous costs that were not directly billable. In other words, the dam project has had well over $6.5m invested in it to date, a significant portion of which has been contributed by the general rate-payer. Something to consider when contemplating should we proceed with the dam.

What Does It Cost Me?

This will depend on where you live and whether you are a water user.

The following chart gives an indication of what you might be expected to contribute by way of rates depending on your circumstances.

Everyone can expect to have the Fixed District Charge of $29 added to their rate bill each year once the dam has been constructed. Remembering that these charges will be phased in during construction so will not appear in full should a green light be given to go ahead.

Those who live in the “Zone of Benefit” can expect a charge related the capital value of your property of around $56 per million of capital value (a calculator is available on the TDC website). This zone of benefit is an arbitrary line that has been drawn approximately around the rate-payers that could potentially be supplied with TDC reticulated water from bores benefiting from the dam. The location of this zone is not an exact science and will undoubtedly cause discussion wherever it is drawn from people just on one side of the line or the other (especially if your property fall just on the rated side). It is an attempt to justify that some people will receive greater benefit than others in Tasman region.

The map of the Zone of Benefit is as follows: 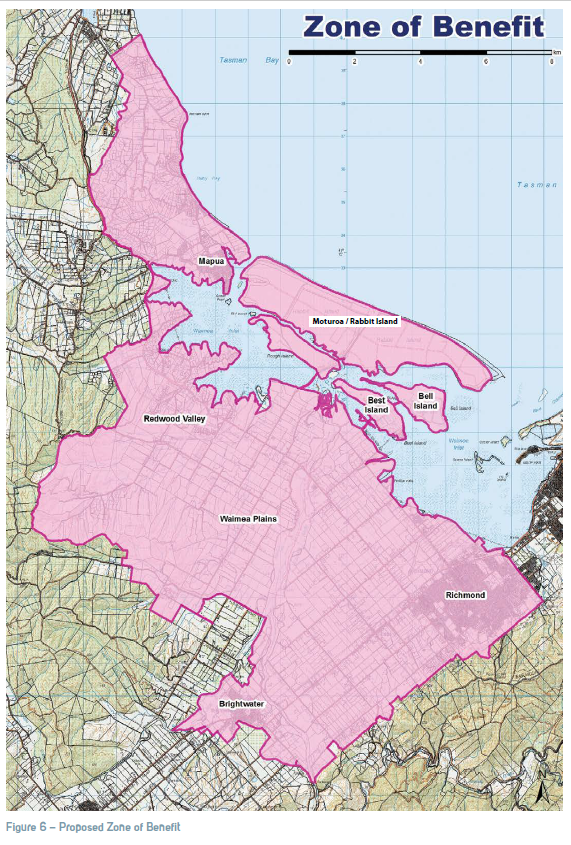 If you are unsure what side of the line your property falls TDC staff will be able to clarify this for you.

On top of the District Wide $29 and the Zone of Benefit charge is also a Water User charge. For those on a council reticulated water scheme that is included in the urban water club/co-op (Motueka urban supply is not) there will be a 10% increase in your water meter charge and your per m³ charge.

One of the points I disagree with the staff position on is that the money robbed from the commercial accounts to pay back the $10 million CIIL loan to council is keeping down the amount rate-payers are paying.  While this money may not be charged to rates directly, it has historically been used to pay down debt (and technically it is still paying debt – dam debt) which has in turn reduced rates, or it had the potential to be used to pay for other projects.  Either way, it is a cost (or loss) to rate-payers and to explain it as a saving to rate-payers is misleading in my books.

The figures quoted above, while optimistic, are the figures that Council is consulting on for your support. This round of consultation is not the final hurdle for the dam. We also have to receive confirmation that the irrigators are able to sign up 3000ha of paying customer equivalents, then we have to receive a quote that fits within our budget (probably the biggest hurdle).

In this round of consultation (which is likely the final chance for the general public to have a say) you are being asked in a somewhat indirect way if you can live with the costs as suggested. If you can, then the council would appreciate your support.

What you are not being asked is the direct question of would you like a dam? Which the mayor was publicly indicating would be asked – as late as the last round of informal consultations on the annual plan this year. Why the about face on that decision I have no idea, other than that as every good salesman learns, you don’t ask a question that has a potential “no” for an answer.

What is also not being asked in so many words, is do you approve of the irrigator subsidy in the currently proposed model. While the irrigators continue to publicly deny that they are being subsidised, this model is far from a user pays model. The irrigators are contributing nothing to the “environmental flow” portion of the dam running costs, which added up over the expected 100 year life of the dam is not insignificant. Nor are they paying their full costs of the CIIL loan because of the generous offer of the rate-payer at large to underwrite their loan saving hundreds of thousands in interest.

The impact of the irrigator subsidy is that the burden of paying for the dam has been shifted to the general ratepayer, the cost of urban water security is double the cost of irrigator supply based on the dam running costs. The question then becomes should the general ratepayer subsidize businesses that will generate almost a billion dollars to the local economy over the next ten years if the dam goes ahead?

Another point raised by staff to council in 2015 (page 20 of this agenda) was that “Council would not be acting prudently unless it ensured that all parties would be able to meet their obligations and not leave Council as the last man standing if costs exceed estimates.”  The current proposal is exactly that imprudent situation where council is the last man left standing for cost overruns!

What you, the ratepayer, have to decide is can you live with the proposal as presented (as ugly and biased as it is) in order to achieve the overall benefit for the community that the end product presents? Or should you cut your nose off to spite your face (as some might describe) by making a principled decision to not support the dam model as presented – which the council will tell you is the best deal that we are ever likely to get.

The choice is yours – I look forward to hearing from you over the coming weeks.