When the Wakefield Mural restoration group were in the market for an artist to refurbish the old historical mural on the side of the chemist shop I contacted local legend Pete Madsen and asked if he would be interested in a community project. He responded affirmatively, and so I connected the two parties.

In excess of 300 hours later I am not sure that he still appreciates my recommendation. Especially, when he was also enlisted to sing at the fund raising gala to pay is wages for the mural painting – that is why he is a legend!

However, pretty much everyone in the community that I have talked to thinks that the right choice was made, and we will have a mural to be proud of for many years to come. A living example of the past, present and the future coming together.

The great unveiling of the mural and commemorative plaque happened this morning with a small gathering of the Baigent family and a few of the local identities. At least one of whom looks a lot like the chemist painted on the wall!

Well done Pete. We hope that this inspires a lot more interest in your small scale art so that you are able to keep the tax man from the door!

Another great example of a community pulling together to achieve a stunning result for everyone. 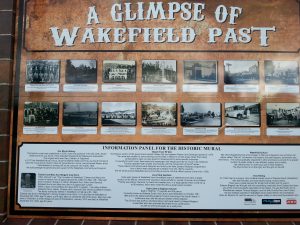