There is a lot of talk about the Wakefield Express Bus service trial that has been requested by some members of the community.  The general view within council is that a study should be conducted into the feasibility of such a service as the correct path with which to proceed, a prudent approach given the economic inviability of such services in the past due to lack of support.  The typical Facebook kneejerk reaction is that a trial will provide the evidence for a feasibility study.  The likely result of an uninformed trial is that it will meet with failure and the bus service will then be unlikely to eventuate in the next 25 years.

Nelsust, who are actively trying to block the Southern Link roadway into Nelson, presented reputably a thousand signature petition to council in support of the bus service. Disregarding the several pages of graffiti tucked away in the middle (oddly reproduced numerous times for all the councillors from a group advocating sustainability), the petition for an express bus service between Wakefield and Nelson was well supported from as far afield as the Gold Coast, Tasmania, Christchurch, Monaco, and Cable Bay. Even within our region it garnered support from Murchison, St Arnaud, Korere, Tadmor, Belgrove, Moutere, Redwood Valley, Mapua, and a surprising number from Stoke, Tahuna, and Nelson.

The petition also included requests for the Wakefield express bus service to start at 88 Valley, to make more stops in Hope, to “Make it go past Waimea Village,” serve “Batup road to Richmond” and to provide “An on request stop at Nelson Airport.” It should service school children travelling into Nelson, practicing sport/cultural events after school, and it should also “Cater for older people that wish to spend 3 or 4 hours in Nelson.”

As for the times that we expect the Wakefield express bus service to operate, according to the survey, here is a sample:
“6.45 am – 10pm” 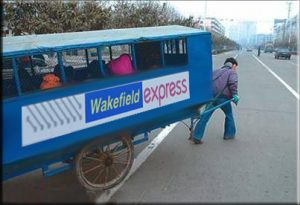 Apart from the obvious conflict of what exactly is the peak commuter service, there is also the conflict of wanting an express service and a service that caters to the rest of society. Petitioners, both in the survey and in the council public forum, suggested that the elderly need an alternative to taxis or reliance on other people. Having been a taxi driver, I do not see a one stop service in Richmond aiding the elderly who wish to travel to the doctors or grocery stores being of much benefit, especially when the time between buses is likely to be 8 hours or more.

The suggested route includes Whakatu Drive and using Beatson road (sorry Stoke, Tahuna, and airport signees), which I find fascinating given that Nelsust do not want the Southern Link to run through there. A bus service running all day every day through there is acceptable but not for anyone else. Remembering that Nelsust is also the group that was going to solve the traffic congestion on Rocks Road by storing logs on Rabbit Island instead of at the port. Despite the fact that they had no idea of how the barging would be achieved, they also failed to take into account that half the logs arriving at the port come from North of Nelson so they would be trucking them via Rocks Road instead of the Southern logs.

Now Nelsust would have the ratepayers of Tasman funding a Wakefield express bus service trial without conducting a feasibility study into the best times, best route, and coming up with a pricing structure that may work.  I was going to suggest that the people of Murchison, Takaka, Motueka, and surrounds might not be too keen on subsidising the few that might use such a service, but according to the petition, the service is widely supported from outlying regions.

Even from the comments on the survey that was submitted there is an underlying reason that many people support the service. Comments such as “Would free up carparks for those that genuinely need them,”  “More cars off the road at peak times,” and  “It is unlikely I will ever use such a service but the whole region stands to benefit” indicate that many people want the bus service for other people to use so that they can travel and park much easier while travelling in their own vehicle.

Which brings me to my next point. Nelsust state that “Each bus can keep 40-50 cars off the road: This is about a km of loadspace saved and is part of the jigsaw of actually reaching road congestion at peak times that we know roadbuilding doesn’t solve.” This one of the main thrust of those presenting the petition to council, that each bus would remove up to 50 cars off the road. This tells me that the current culture is as represented by this comment: “I would fully endorse a bus service as described above, I currently drive alone to Nelson.”

Most of the vehicles travelling in commuter traffic have one occupant or two at best. So, I disagree with Nelsust and this petitioner who believes that “…we need to reduce the volume of personal vehicle movements. Nelson and Tasman councils need to be proactive guiding and supporting this change, and funding public transport is highly likely to be the cheapest and simplest lever to pull in this regard.”

The simplest and most cost-effective lever to pull to prove that public transport is a viable option is car-pooling. This is a no cost to the rate-payer risk-free alternative to a bus trial that will prove that people are of a mind to share transport, and that is through organising car-pools. This can be done very easily through social networks, online networks, phone apps, and local news advertising.

I would be more impressed and more likely to endorse council funding a bus trial had Nelsust come to us with a proposal to take 6 – 10 cars off the road, rather than the 50 they currently suggest for each bus. A list of car-pools operating at the time of a suggested bus route would carry a lot more weight than a petition carrying 1000 signature from here to Australia as it would show demand for shared transport and pattern of behaviour already established.

Nelsust believe that the point of difference of a bus is:

1)      that bus passengers can get things done on the way, whether texting,
phoning, reading, knitting or talking to strangers, whereas in a car the
commute is a waste of time,

2)      that anyone with a conscience about carbon emissions can travel guilt
free, as the bus is going anyway,

3)      for people who have to rely on parents or others to drive them, the
point of difference is independence.

Carpooling also allows the majority of travellers to knit, text, phone, read, or talk to strangers. If we do not get the bus service matched to the needs of those who will actually use such a service then the buses will be running empty in addition to all the other carbon emitting vehicles on the road. And for people who have to rely on others to drive them – they will still be relying on others to drive them (duh!) it is just that all the other rate payers will be expected to fund their transport.

It is also a valuable note for those presenting petitions to the council to have their facts in order before coming and telling us about things that they apparently have no knowledge about. It does not help your cause when you stand there and tell us replacing all these light vehicle movements with heavy vehicle movements will save on wear and tear of the roads – when the converse is actually the case.

To summarize, Nelsust want council to just go ahead and put on an express bus service between Wakefield and Nelson running at “peak hours only” with “intermediate stops at Brightwater and Richmond” (without giving us any indication of what peak hours are, or how many intermediate stops) to cater to commuters, the elderly, and for school children. As was commented by another member of the public when the petition was presented, in order to contribute to the success of the trial council would also be expected to erect bus shelters at the various stops.

And they want us to “just do it” (to quote Nike), the most probable response will be to quote a local beer commercial …